As Donald Trump was sworn in as the 45th President of the United States, there were two notable points in his inaugural speech.

The first point is President Trump took a firm stance against the political establishment. His message was conveyed such there will be a power transfer from government back to the private sector. By ending state control, “carnage” as President Trump described it, would end effectively. That may imply government intervention in private markets is now something of the past. One may argue President Trump took to heart the ideologies of the late economist Paul Samuelson. He argued maximizing welfare for the public results in an economy operating at optimal efficiency. The speech focus on “buy American, hire American” is adage to Samuelson by way of Trump’s objective to reduce government to achieve sustainable higher growth.

Financial markets took the inauguration speech as a formal underlining of pro-growth and pro-business policy outlined during the campaign. Although many feel there remains uncertainty about the outlook for policy, markets have judged this differently. This can be seen from the divergence between the VIX index, a gauge of fear, and the policy uncertainty index, a measure of aggregate news related to politics. This is shown in Figure 1. The divergence between policy uncertainty and market fear has happened during 2012 and 2013, right before the U.S. economy experienced several quarters of over 4 percent growth. Hence interest rates “renormalized” to 2.5 percent and broader equity indices remain near record highs.

The second important point from the speech is Trump’s plan to renegotiate trade deals. There are two distinctive directions the President can take with an immediate executive order: 1) withdraw from the Trans-Pacific Partnership (“TPP”) and “renegotiating” North Atlantic Free Trade Agreement (“NAFTA”). The latter could be renegotiated by applying a “border adjustment tax” to companies that export goods to the U.S. (http://www.investopedia.com/terms/b/border-adjustment-tax.asp) or by applying an universal 5 percent tariff to all imported goods.

Financial markets remain at odds to what extent tariffs and border taxes can be applied. One view markets have taken is such trade policies could be harmful to the U.S. economy. Indeed, since the start of 2017, the dollar has depreciated against major currencies by 1 to 4 percent (except against the Mexican Peso). The importance of the NAFTA is President Trump administration plans to renegotiate the trade deal rather than to withdraw like the TPP (see for more https://www.whitehouse.gov/trade-deals-working-all-americans). 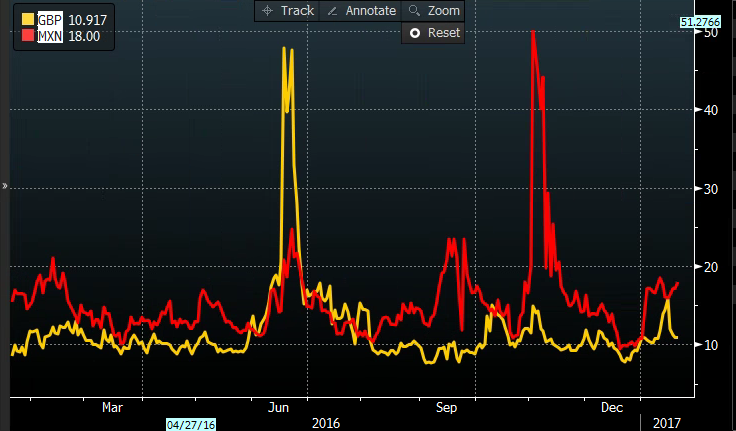 As the global economy and policy makers ready for President Trump’s “100-day plan”, the initial conditions in markets remain very loose. This set of conditions will allow monetary policy to slowly adjust to a higher interest rate path. This is likely to keep yield curves steeper, credit risk premiums range bound and equity valuations near present levels. The inauguration speech was “priced to perfection” as a benchmark for markets. In the spirit of Samuelson, markets will be the ultimate determinant whether “carnage” in the U.S. economy can be fully eradicated. Only time can tell.