We expect that 2017 is setting up to be a year of heightened activity in Advanced technology, leading to a robust IPO market in 2017.

A decade of repressive regulations, costs and other aftershocks of the dual crises(2000-02 & 08/09) have created a pressure valve set to burst. The mountain of regulations have kept fast growing private companies private longer and the money followed. Venture Capital, and in particular, late stage capital(growth funds) have allowed the companies plentiful access to massive funding without the public markets. Advances in innovation have been accelerating at an exponential rate, costs to develop have dropped by orders of magnitude and available pool of talent has dramatically increased. After a long run of activity, the confluence of mobility, big data and now Artificial intelligence have created a propulsion force for companies. The shift in regulatory regime in place now should lead to more exits in 2017.

The law of supply and demand would argue for this as a good thing for the markets. Interestingly, the supply of public companies continues to shrink. At the "Tech bubble peak" there were more than 9,000 public companies,today there are 1/3 less. There are many possible consequences of this dynamic. Of course, it is easier for the markets to squeeze higher as they have given the mountain of money chasing fewer and fewer stocks. This could also be influencing the trend to passive vs active investing. With so few opportunties, it is harder to pick differentiated winners to beat the market.

In fact, 2016 was such a poor year for IPO's that it was the worst in terms of number of new issues since 2009. Furthermore, it was the lowest in total dollar volume of IPO's in since the last century! 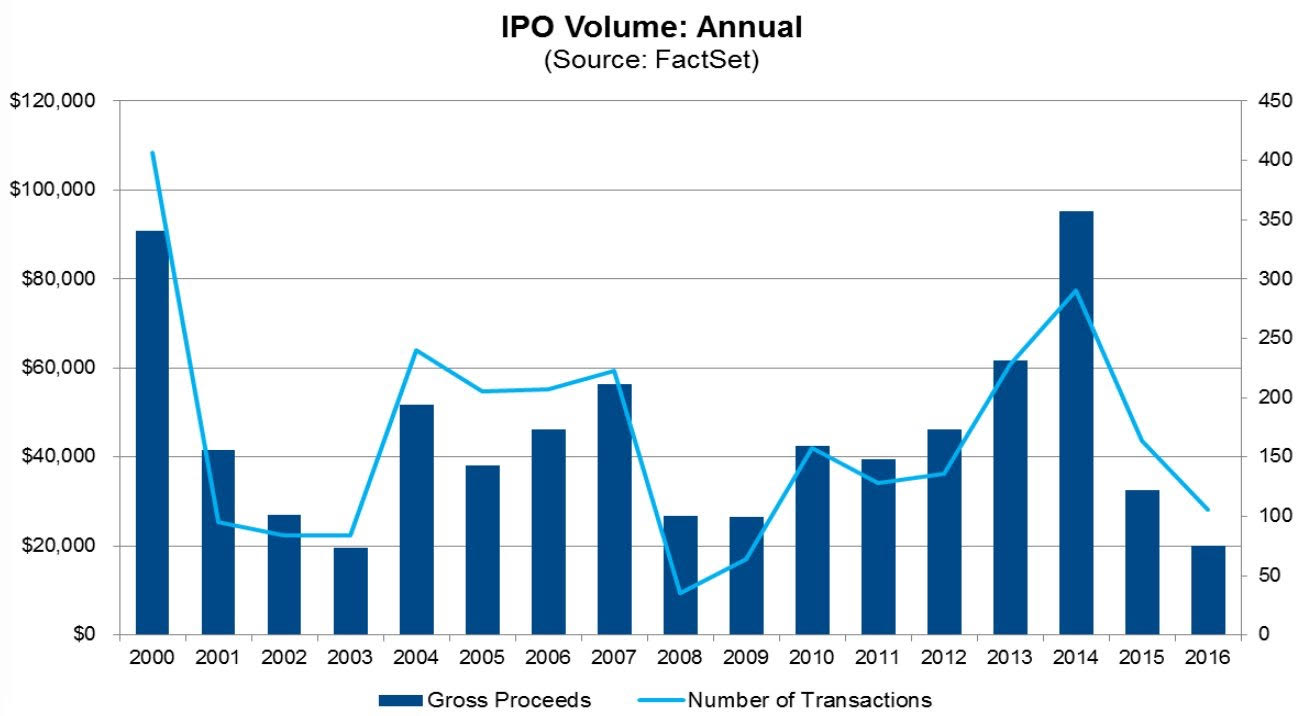 A bit of perspective is in order:
Current Universe of “Unicorns” in 2016 - According to VentureBeat & NVCA:

There is a wave of enormous capital in the hands of technology Investors. According to KMPG Venture Pulse, Venture-backed exits declined 26 percent year over year. But globally, deal funding is still huge. Total deal funding in 2016 was $127 billion but declined from $141 billion in 2015.

In conclusion, while we expect numerous Unicorns and others to file their Initial Public Offerings this year. We are also expecting many dissapointments with regards to their after market trading. These late stage market valuations have risen to such an extent that the compression in valuations post pricing is likely to be a common theme. The appetite will be there for the offerings, but unfortunately, many of these companies will need to deal with a liquid, two sided market for the first time.

An End to the American Carnage