Credit risk premiums recently narrowed to their tightest levels since late 2007. There are a few risks emerging at the horizon that may alter valuation of corporate bonds. These risks can be put into three categories: 1) macro risks, 2) cross border holdings and 3) non-repatriated earnings and corporate tax reform.

In the Minutes of the Federal Reserve released this week, there was a discussion how to respond when the economy with an already tight labor market could face additional fiscal stimulus. Many FOMC members saw a quicker tightening as the appropriate response. This tightening would be through 2 to 3 rate hikes in 2017, possibly followed by a reduction of the size of the Fed's balance sheet.

These tightening measures may come at a time when U.S. corporations have large debt redemptions coming due starting in 2017. This is shown in Figure 1. Investment Grade corporate debt and High Yield debt have redemptions (maturing debt) that coincide with maturing Treasury holdings on the Fed’s balance sheet. If the Federal Reserve were to normalize the balance sheet, a risk is corporations may suddenly find themselves in a difficult spot to refinance maturing debt. The main reason is that the Fed's large balance sheet contributed to a favorable low interest rate environment for corporations. By shrinking the Fed's balance sheet, financial conditions may tighten materially, limiting capital market access for corporations.

Another source of risk is holdings of U.S. corporate bonds by domestic and foreign investors. Since 2012, over $4 trillion of corporate debt has been cumulatively issued, bringing the total outstanding to $8.5 trillion. As all this debt was issued, investors globally bought a large share because interest rates in some countries were negative or investors substituted Treasury debt for corporate debt with a perception of "safety." The result has been that cross border holdings swelled to $3.5 trillion with about $2.2 trillion held in Europe, shown in Figure 2. The cross border holdings may become a risk for " credit contagion" when foreign investors decide to exit.

The word “credit contagion” is also related to cross holdings of debt among U.S. companies. Since 2012, many U.S. corporations issued debt to finance share buybacks. The bonds issued were often purchased by other U.S. corporations that also debt financed their share buybacks. There is a specific aspect to cross holdings of bonds by companies that has to do with “non-repatriated” foreign earnings.

According S&P research, U.S. companies have accumulated $2.3 trillion in “non-repatriated” foreign earnings since 2005. From this $2.3 trillion amount, approximately $750 billion is invested across different assets classes. This is shown in Figure 3. For example, 34 percent or $255 billion from the total un-repatriated foreign earnings is invested Investment Grade Corporate bonds with generally 3 to 6-year maturity according to 10K filings of the 25 largest companies in the S&P 500. The bonds are cross held in corporations held for sale investment portfolios. If there was a fundamental change such as corporate tax reform, companies could be “forced” to sell corporate bonds of other companies in order to fund taxation of foreign earnings. 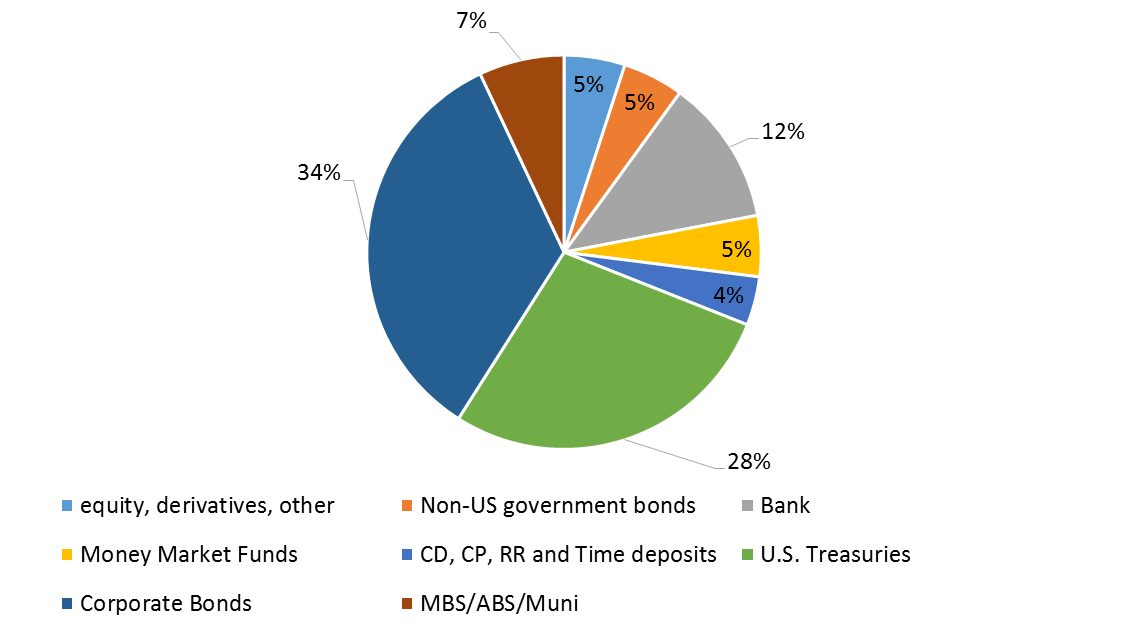 Corporate tax reform was a hot topic during the Presidential campaign. The proposal by President-elect Trump would bring the effective corporate tax rate down by swapping loopholes and deductions for a lower headline rate of 15 percent from the current 35 percent. Accumulated non-repatriated foreign earnings would be subject to an immediate tax charge of 10 percent and then there would be no deferral of tax payments. If these tax plans would be put into legislation, companies with large tax deferred foreign earnings could pay about $125 billion in additional taxes according to S&P research.

Resolving the significant amount of non-repatriated earnings requires funding of tax payments by U.S. companies that for many years enjoyed tax deferred foreign earnings. As corporate tax reform is likely to be enacted in 2017, companies with accumulated foreign earnings may have to choose to either sell securities or use cash held abroad to reduce outstanding debt.

Taking the three described risks together, the investment grade and high yield market may see potential widening of risk premiums as investors discount a tighter environment for corporate credit conditions. Despite companies over the past few years have “termed out” the maturity of their outstanding debt, which may result in a decline of projected corporate debt issuance by $200 to $400 billion gross per annum, the three described risks could become material. With corporate risk premiums already near the tightest levels shown in Figure 4, investors should be mindful of the "credit contagion" that could prevail when corporate tax reform becomes law. To put some scale on corporate bond holdings, $255bn represents almost 11 times the annual flows into the equivalent Global Fixed Income ETFs as reported by Bloomberg Intelligence. Marginal selling of these corporate bond portfolios, to fund tax payments, share buybacks or debt repurchases could put upward pressure on corporate bond yields and spreads.

However such risks also offer opportunity. For example, Investment grade corporate bonds that are held across companies reside most in the technology and financial sector according recent Wall Street Journal analysis. In terms of the effect of the new administration's tax plans, technology debt may eventually trade at a premium in terms of spread to financial debt. This is shown in Figure 5 where the spread of the financials corporate index is expressed as a ratio to the spread of the technology corporate index. Currently financials trade at a wider risk premium to technology (hence a spread ratio of greater than 1). And although tech companies have less debt outstanding than financial companies, technology bonds are held the most across other technology and major industrial companies according to the WsJ (see source below chart). At the same time, tax changes driving domestic growth higher resulting in a steeper yield curve, benefits the financial sector. The investment conclusion is the financial corporate bond sector may see relative outperformance to the technology sector as tax reform comes to fore.