Since the U.S. elections, the dollar has surged by 5 percent while emerging market currencies fell by double. When the value of the dollar spikes, global GDP on average has contracted by 2 percentage points in the past, and eventually dip into recession territory (see Figure 1). Currently, markets are in the “first inning” of a periods of rising rates, surging dollar and contracting global GDP. This combination could have two profound effects: dollar shortage and Fed balance sheet contraction. 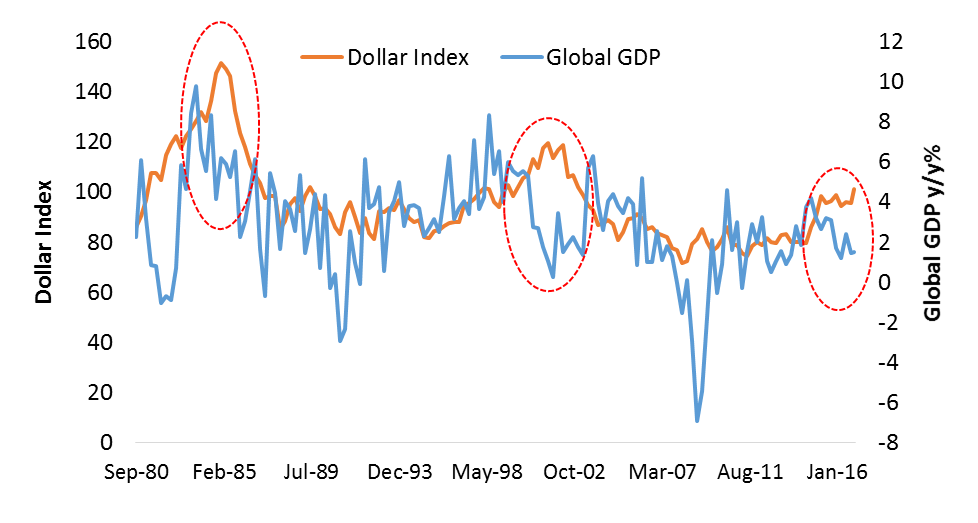 Since the middle of 1990s, global debt denominated in dollars has expanded by an average of $1.5 trillion a year, to a cumulative of $50 trillion today according the Bank of International Settlements. Unlike in the 1980s and 1990s, today’s strength of the dollar has more acute effect on financial leverage through “dollar shortage.”

Figure 2 expresses dollar shortage by taking a simple weighted average of “cross-currency basis swaps” of major developed countries. These swaps are derivatives contracts that allow two parties to borrow and lend dollars by swapping floating interest rates in different currencies. The difference is called the “basis spread”, the difference between London Interbank Offered Rate (“Libor”) in dollars and Libor in a foreign currency. A negative basis spread is indicative of demand for dollars because those in need (“shortage”) of dollars, are willing to pay a higher floating rate cost in dollars than in their domestic currency.

Figure 2 shows the basis swap spread was stable around zero when the dollar was on decline. Markets have arrived at a juncture where dollar debt is at such high levels, any appreciation of the dollar could cause significant shortage of dollars. For the global economy this could be negative because over 75 percent of global trade and commodities is settled in dollars according to the World Trade Organization. 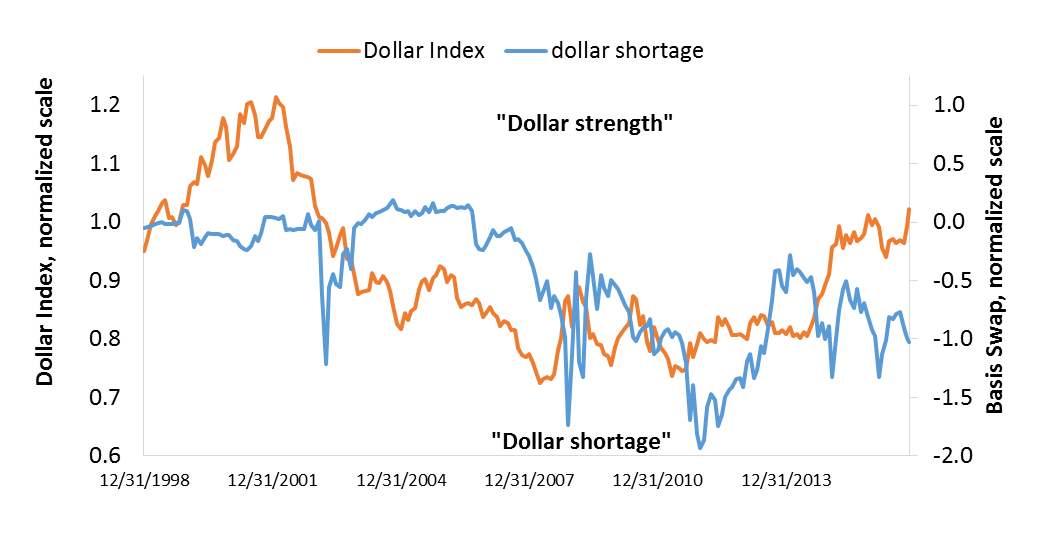 The second effect of a strong dollar is the “rollover” of the Fed’s Balance starting in 2017. That coincides with a “maturity wall” in high yield bonds, shown in Figure 3. The Fed’s balance sheet is projected to contract significantly by 2017 and 2018. Historically, the Fed’s balance sheet has not played a role in the cycle of the dollar and global GDP. This time, the potential shrinkage of the balance sheet driven by looser fiscal policy boosting economic conditions, may have a material impact. Unwind of the Fed’s balance sheet tightens financial conditions that could be compounded by a strong dollar. As 2017 approaches, the global economy faces several “walls of worry”: a shortage of dollars, a shrinkage of the Fed balance sheet and a large rollover of corporate debt. Financial markets are calibrating what interest rate would equalize the imbalance between dollars and debt. If empirical data is a gauge, interest rates and the dollar may first overshoot before they settle down.

Figure 3: The Two Walls of Worry 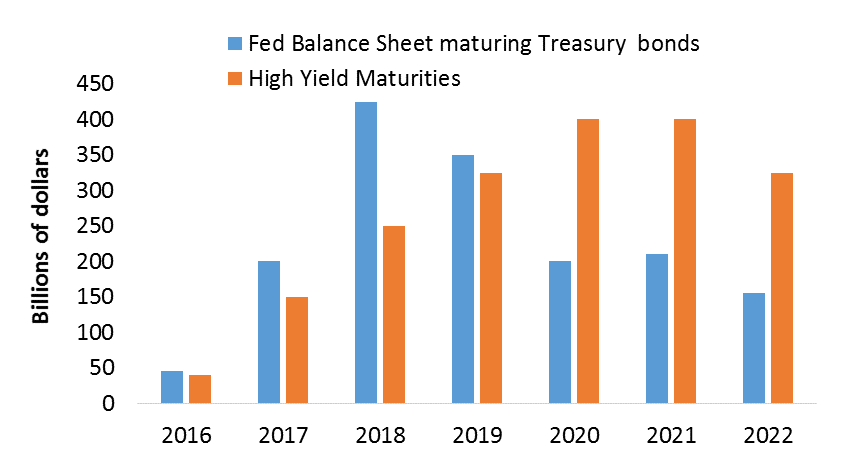