In her sit down discussion in London, Federal Reserve Chair Yellen presented a milder version of what Alan Greenspan once dubbed 20-years earlier as “irrational exuberance” to describe the state of the stock market. Fed Chair Yellen said valuations appear to be “somewhat rich” when measured on traditional models. The model she referred to is the “Fed model” of stock valuations, introduced by Alan Greenspan at the Humprey Hawkins testimony in 1997. The model uses the 1-year forward earnings yield of the S&P 500 and compares that to the 10-year Treasury yield. When these two are equal, the stock and bond market are in “equilibrium.” In Figure 1, the historical series is shown and it shows there is a wide gap between the S&P forward earnings yield and Treasury yield. 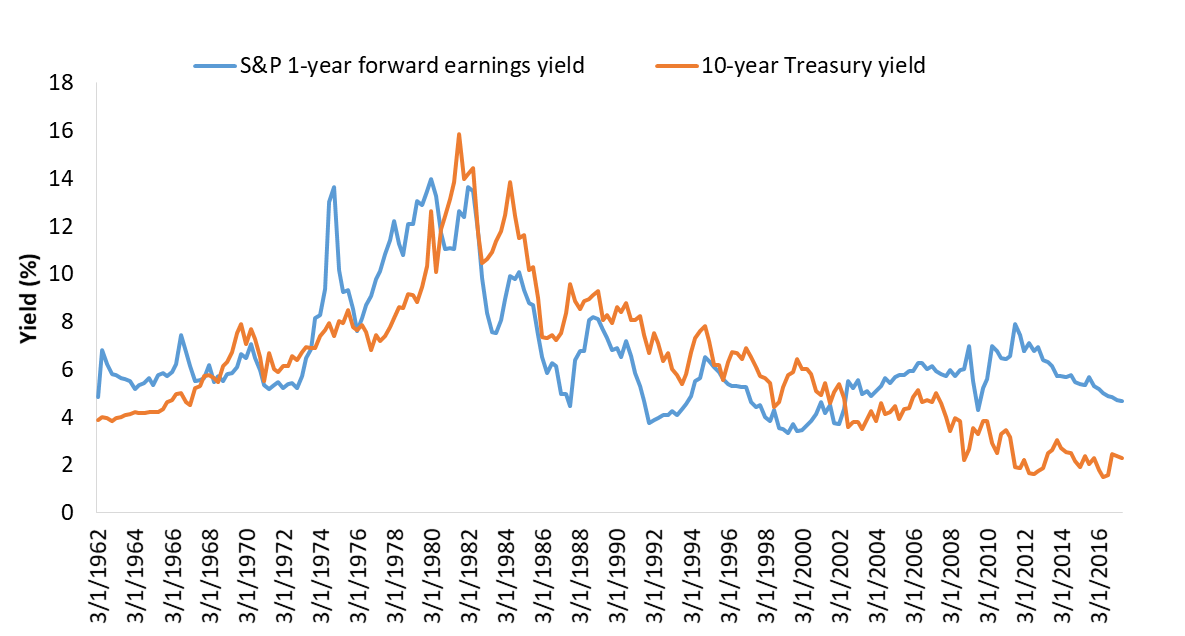 The gap may suggest equities are not overvalued relative to bonds, unlike during the middle of 1980s to late 1990s when the equity earnings yield trailed below bond yields. There is an argument that bond yields are artificially low due the Fed’s QE program and strong demand for long term income assets. The Fed model was advanced to calculate the difference between the earnings yield and the “adjusted” earnings yield, which is expected earnings growth minus the long term real interest rate. The history is shown in Figure 2. 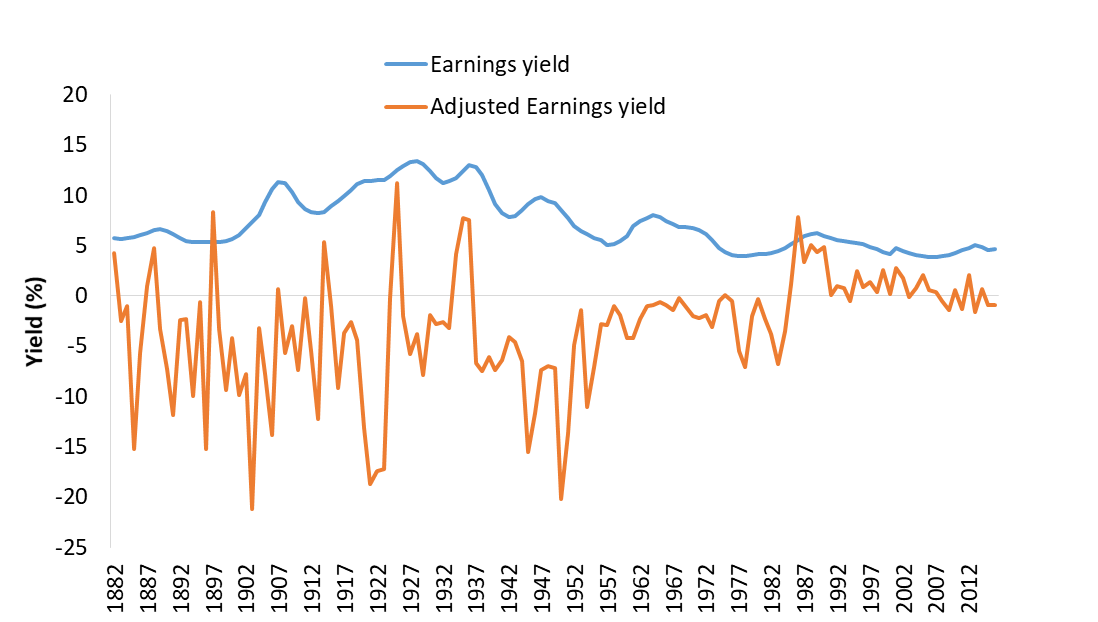 This model suggests that on real term basis (i.e. adjusted for inflation), the earnings yield has entered in negative territory. This history may suggest that on an inflation adjusted basis, Yellen’s comments about somewhat rich have some merit. After all, investor should really care about (after tax) real returns.

There are however several other ways to look at valuation, including Robert Shiller’s CAPE ratio, which stands for “cyclically adjusted price earnings ratio.” On this basis, equity earnings yields are lower (because forward PE on CAPE is near 26) but still well above bond yields. Valuation on this model suggests equity outperformance is not at an end. 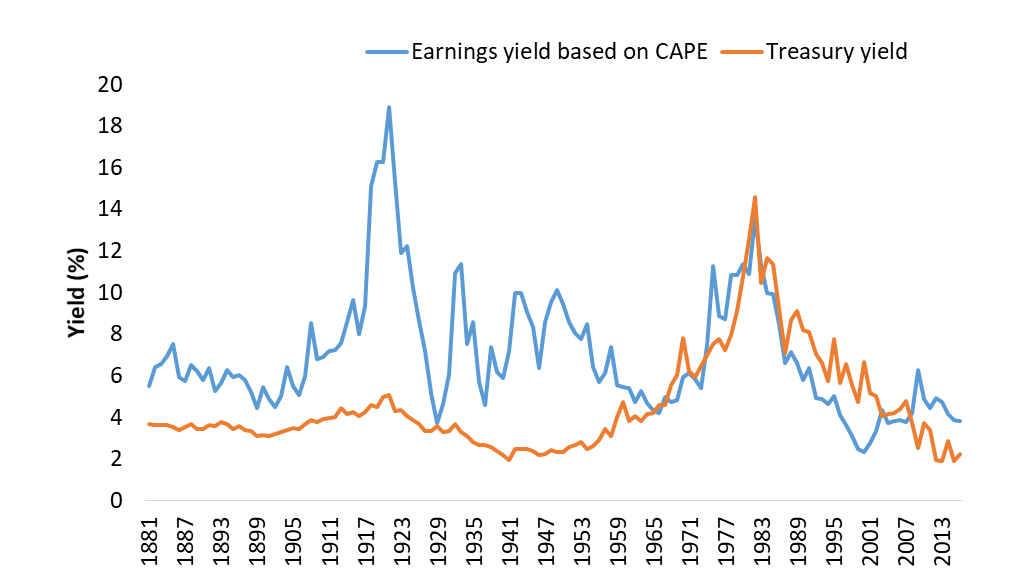 In a lively discussion at the CFA in Philadelphia (see here) about the future of stock market returns, the conclusion was a sober 4 to 6 percent average for the foreseeable future. Jack Bogle, Jeremy Siegel and Robert Shiller each have their own versions of a stock valuation model, and each concluded returns would be marginal going forward.

Another way to approach valuation is on volatility basis. The main volatility gauge—"VIX index"—has been trading at near historic lows. This had a significant impact on “skew”, the difference between put and call implied volatility. The skew index has reached historic highs and is about 20 percent higher from pre-crisis highs. That may suggest S&P downside risk protection is low and the stock market may have reached a stage of near overvaluation. At the same time, returns from writing puts on the S&P index is lucrative despite a record high option skew. 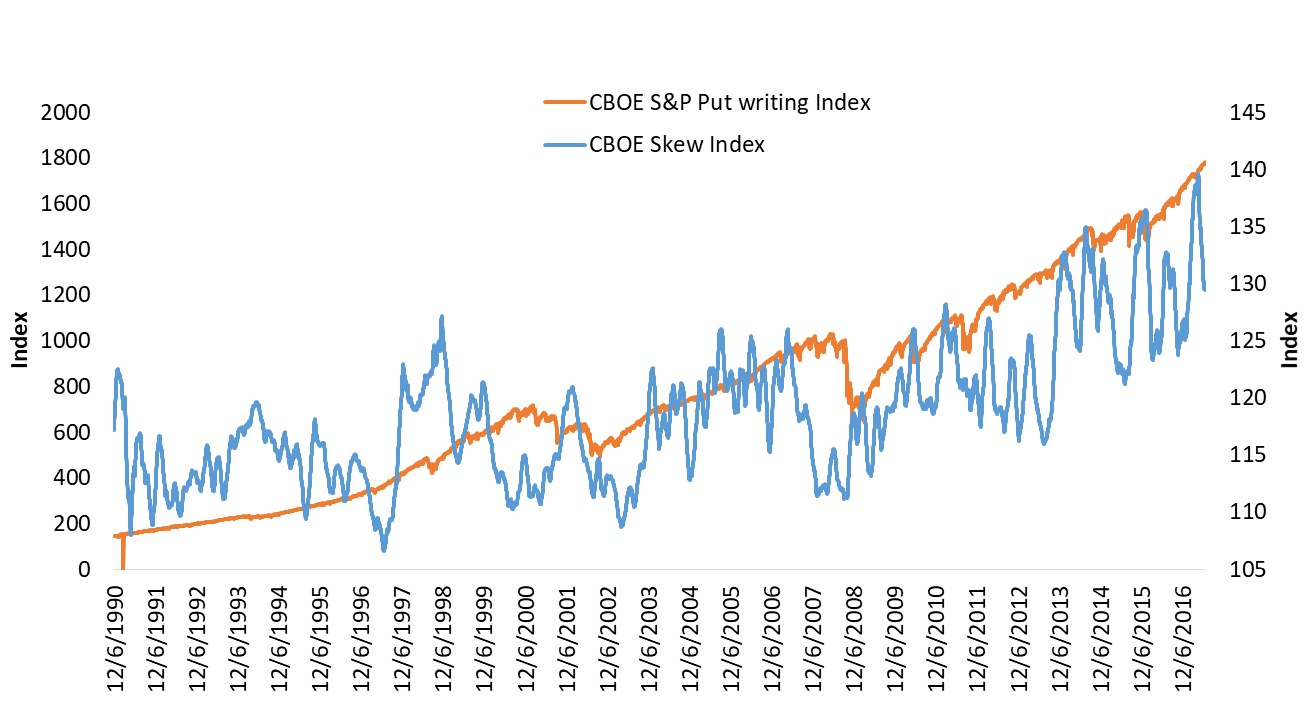 So which valuation model is right? It can be concluded that one answer to the valuation puzzle is in ultra-low interest rates. Those low rates support rising earnings multiples through a net present value effect. There is however a natural anxiety against “record high” stock prices because history of those have shown an unpleasant ending. Central banks do hold an important key to how valuations will play out. Over the past weeks, several events (Korea, White House) pushed the VIX finally higher, which some commentators have said to be a precursor for a traditional stormy fall. For now, low volatility with little economic up or downside surprises solidifies “buy on dips” mentality. The Fed stress tests have added to the dividend share buyback bid that has been under the market since 2009. The change in that supporting trend may ultimately determine whether the stock market is truly overvalued.

Another Day, Another Estate Tax Repeal…

Is the U.S. experiencing shadow deflation?