"If a capitalist had been present at Kitty Hawk back in the early 1900s, he should have shot Orville Wright." So said Warren Buffet in 2003. My how things change...Great investors are never dogmatic.

As you may recall from our post three months ago(Nov 11, 2016), we have been unabashed bulls on the airline sector for a very long time.

In a nutshell, we think capacity discipline and the rationalization of the US airline industry are driving significant efficiencies (not to mention the indirect benefit that they receive from all of the oil and gas that the US is pumping). This is likely to lead to real value creation In fact, we think it already is. Just last week, Delta announced that they were contributing $1 Billion into it's employee pension. This is a full $500mm above it's minimum requirement. This is a remarkable feat in and of itself as there has never been an airline that has had that level of free cash flow. 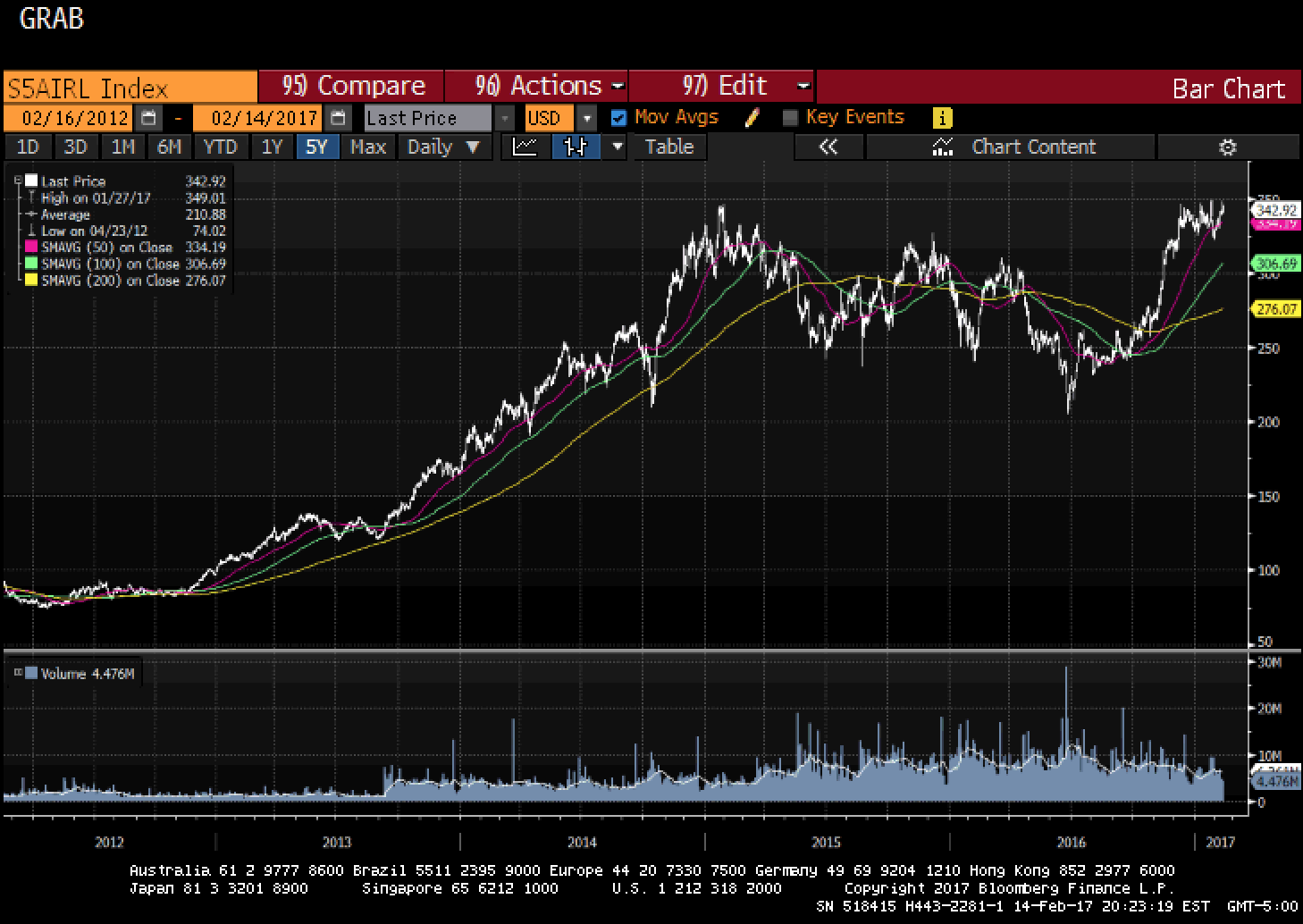 So today, Warren Buffet and Berkshire Hathaway have announced in his most recent 13F filings that they have once again increased their stake inn the airline sector. In an impressive level of committment, he is now the largest holder of Delta(DAL) an increase of 847% and a six fold increase in United (UAL) and second largest holder of American(AAL) and Southwest(LUV). 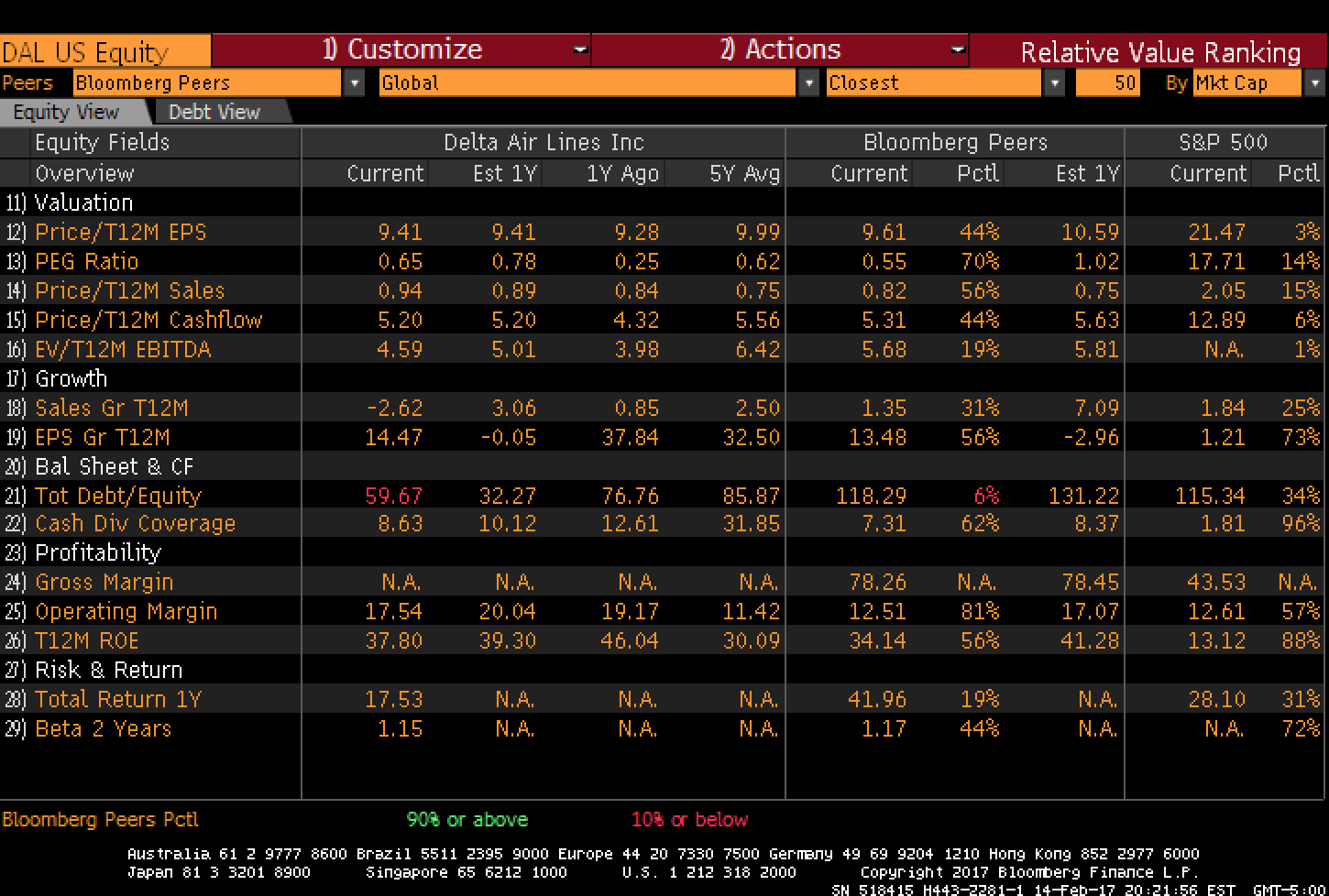 We note that this great investor with a tendency towards vertigo is certainly averaging up but at still attractive fundamental valuations. As you see below, the largest of the group trades at just 9x PE and 5x cash flow.

As has been his unique habit, Warren Buffet's Berkshire Hathaway has taken an aggressive stake in an industry. Berkshire has filed their Q3 2016 13F filing today and among them was a particularly outstanding item. He has acquired large stakes in an airline, no make that "ALL" four major airline companies, or, the entire industry. Warren Buffet has acquired stakes ranging from $300mm to $1bb in value in each of the legacy carriers, American Air, Delta and United Continental. He also took a stake in Southwest.

As we have been stating for quite awhile, the relatively rapid consolidation in the Airline industry, (Continental, Virgin are the latest two) has created a dynamic similar to what the railroad industry went through a decade ago.

The consolidation of the rails created significantly better operating profiles for the industry and "brought it back". It may appear that Buffet is seeing what we have been seeing now in the airlines. That is a replay in the Airline sector like that of the rail industry consolidation. The results benefited the entire industry.

Berkshire Hathaway saw that previous consolidation in the rails years ago and took meaningful positions along the way. Buffet has consistently been a holder of Transportation stocks. He had positions in the rails throughout the early 2000's. But in late 2009 he took a massive stake in Burlington Northern to the tune of owning the whole thing for $34bb. Since then, the entire industry has had massive stock returns, as seen below: (source Bloomberg L.P)

As you will see from the data below, the typical legacy air carrier is cheap, at 9x PE and 4x ebitda. This with far more "capacity discipline" and lesser competition, we could see a multi year rally in the industry. The icing on the cake could just be the impact of a less regulatory focused government.

Delta alone created nearly $4bb in free cash flow in 2015 and will be in that vicinity for 2016. In the beginning of the decade, ROIC was about 5% for legacy carriers. In 2014, when the average price for a barrel of oil was still $90, their ROIC was around 15%. Today, the big airline companies' ROIC is above 20%, a result of margin improvements, growing RASM, lower leverage and consolidation activity in the sector. All of them a consequence of a sustained period of elevated oil prices, forcing Delta to become more efficient. DAL has deleveraged its balance sheet during the past years, and is also very friendly towards its shareholders, with massive dividends and buybacks that generate a 7% return. (Source: Bloomberg L.P.)

And this from Deutsche Bank: With a president-elect who is pro-business and Republican control of the House and Senate, we are hopeful that the US airline industry will benefit from the changes at the top given that the sector directly and indirectly contributes $1.5 trillion per year to the US economy and provides more than 10 million jobs. For starters, President-elect Trump’s $1 trillion plan to improve infrastructure could mean that major industry initiatives such as air traffic control modernization and various runway and airport construction projects come to fruition. Furthermore, mounting regulations (some with unintended consequences – see below) as well as growing federal overreach under the current administration have, at times, stymied the sector’s ability to create jobs and promote commerce.

As you can see from the chart of Delta Airlines (which is the largest of the carriers) the share prices have been consolidating their previous gains for most of the past 2 years. They have weathered some pretty strong storms, including the GFC and the persistently high level of oil prices. Throughout this, the industry has stayed solidly profitable. (Source: Bloomberg L.P.)

It used to be said, that airlines are not an investment, but just a trade. That may be changing....

A Different Take on the Recent Payrolls Report

A Level Playing Field for the Trump Trade