The stunning victory by President elect Donald Trump may be out of the playbook of the “democratic domino theory.” Empirical research (Leeson/Dean) found across 130 countries between 1850 and 2000 that “democratic dominoes” catch around 11 percent of their average geographic neighbors’ changes in democracy. In the context of the outcome of Brexit and the Trump win, political movements in rural areas most prone to global trade, emulate each other’s victories by a substantial voter turnout.

Currency markets respond with significant dislocations (see Figure 1) in response to a political regime shift. This happened to the Pound during EMS crisis in 1992 and the Mexican Peso crisis in 1994. In reaction to those crises, the CNY devalued and U.S. interest rates saw a violent sell off in 1994. Today, this sequence repeats almost identically. To understand why and how to position for it, investors must understand today’s market reaction to Brexit and Trump. 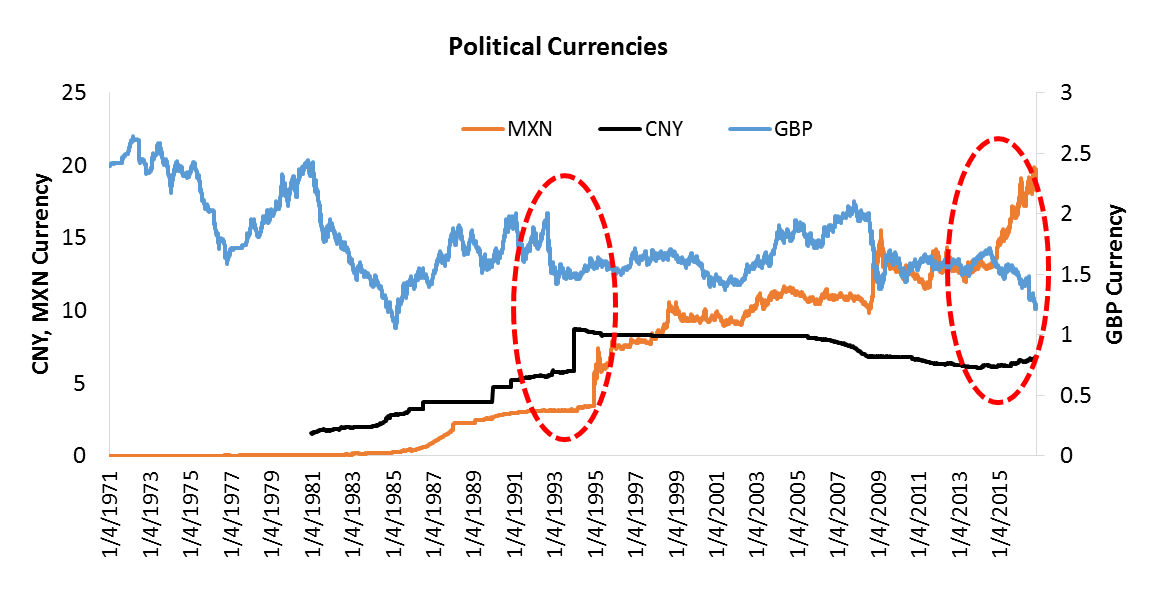 The Brexit and Trump win have been defined as “unknown unknowns” because they represent improbable or even impossible outcomes. Markets react to such events with a “risk off, risk on” attitude. When uncertainty reaches a climax, high liquidity in commoditized assets help risk off to transition to risk on when a large balance sheet is willing to step in. In the case of the Presidential Election, it was the balance sheet of hedge fund investor Carl Icahn, who bought $1 billion equivalent of S&P futures while celebrating Republican victory at Trump Tower.

The outsized moves in markets, notably the dislocation in the Pound and Peso and 3 standard deviation jump in U.S. rates, have further long term ramifications. In the 1990s, large currency swings were a pre cursor to a productivity boom and globalization. Today, currency market dislocations signal protectionism and repatriation. Markets however may have responded overnight positively to the prospect of less domestic political discord and gridlock in the U.S., making it easier for more bipartisan support of large fiscal spending despite concerns of rising debt levels.

A combination of limited political dysfunction and ultra-loose global financial conditions allows a smoother transition to a higher interest rate regime. Indeed, the probability of a Fed hike in December swung intra-day back to 80 percent, and break-even inflation rates normalized back to levels considered as “normal.” The election has made it possible for the Fed to continue a gradual tightening campaign. As the political uncertainty for the time being dissipates, today’s “tantrum” in Treasuries is not the same as previous episodes shown in Figure 2. Interest rates may continue normalize to vicinity of 2.5 percent for the 10-year Treasury. 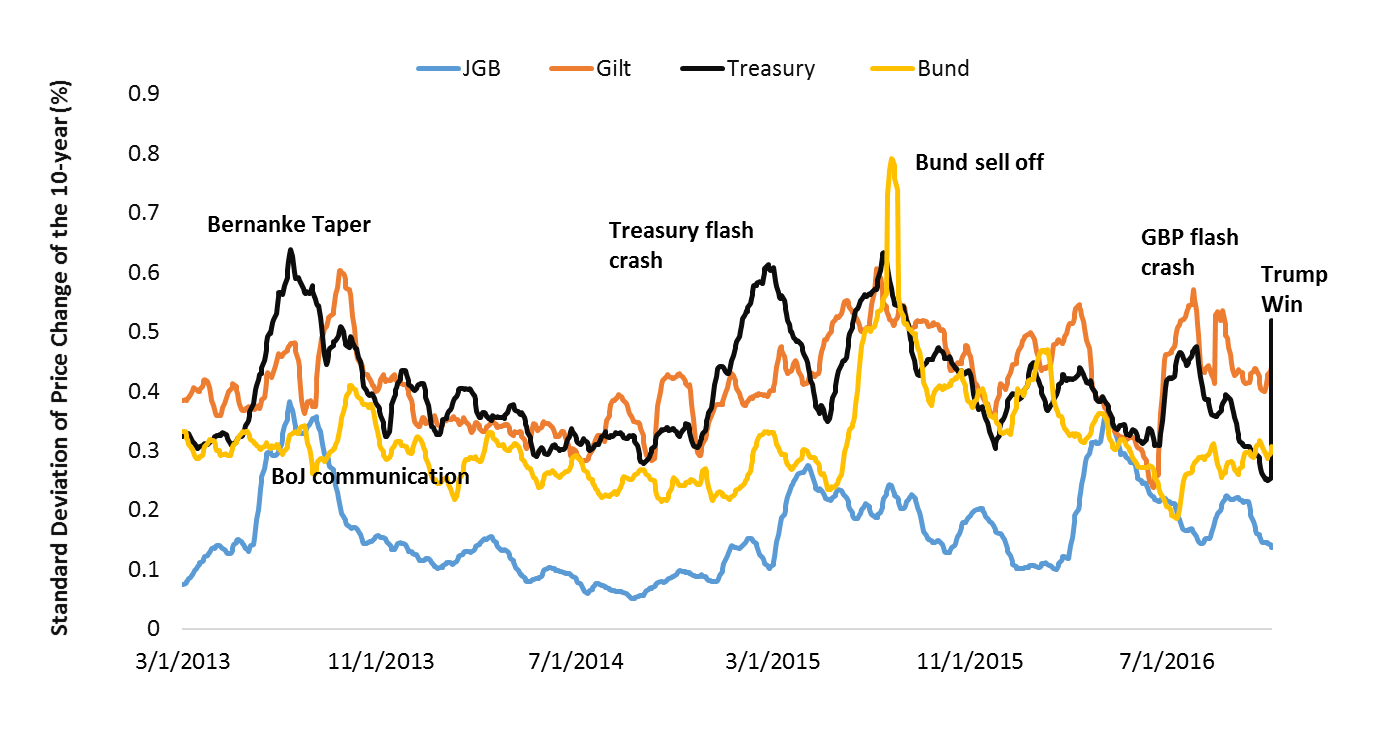 Today’s market reaction had more depth in terms what portfolio position may be desirable. The recovery in financial stocks as the yield curve steepens may be one logical area, and may be bolstered by possible changes to Dodd-Frank and some sort of reinstatement of Glass-Steagall. The fact global equity and risk assets have responded so positively is also an historical fact. Stock markets gained 12 percent on average a year under a newly elected U.S. President. As it turns out, the Brexit and Trump win may have proven to be well timed events at the juncture of a recovery in company earnings and restoration of global pricing power witnessed by rising producer inflation. An inflation linked strategy could be a proper portfolio into 2017.

The greatest risk for investors is the potential of a global trade war if any political attempt is made to change long standing trade agreements. The adverse impact on the global supply chains can be significant because over $ 8 trillion in global trade commerce is derived from a highly integrated NAFTA and the world economy. Further preemptive Fed tightening as fiscal stimulus assists U.S. (and U.K.) inflation to overshoot, may be ill-timed given the U.S. monetary base seen the largest contraction since the 1930s (see Figure 3).

Investors should take Brexit and Trump win as an offensive portfolio but with adequately and patient capital to take advantage of dislocations. The true dislocation of MXN versus GBP in Figure 1 and CNY depreciation and higher U.S. rates may prove to be again a boon for rising productivity. In the new era of a Trump President, a significant change in productivity which is under way may be the global domino to watch. 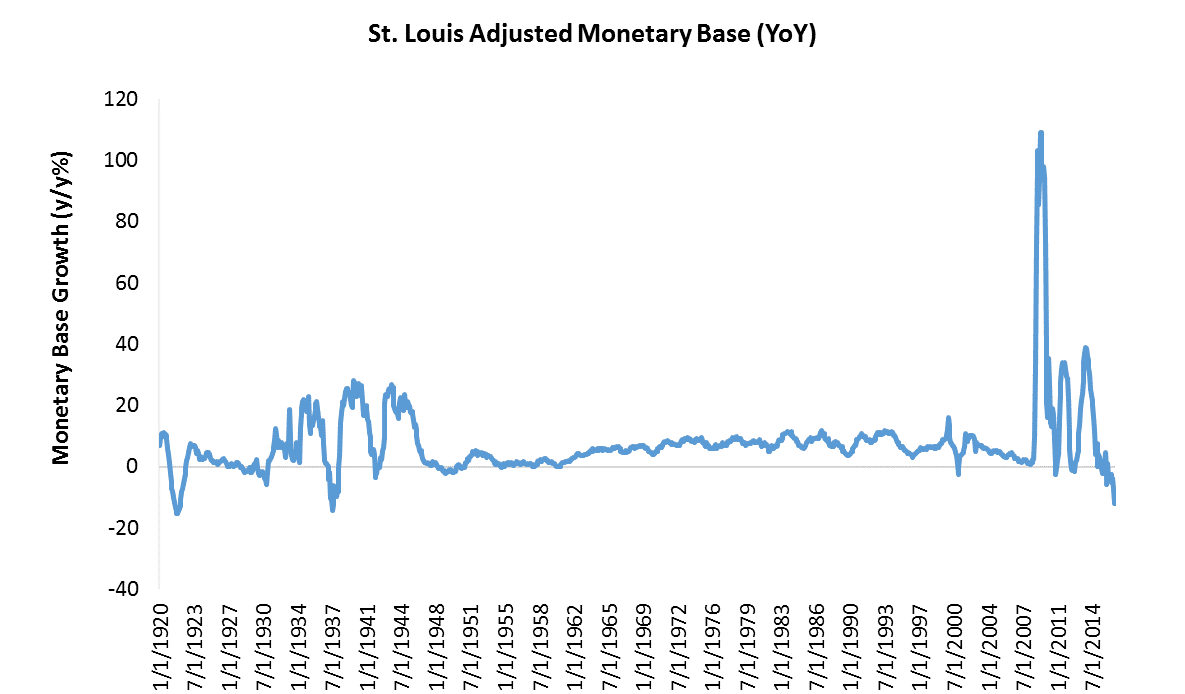 What now? Take a deep breath.....we have been here before