Market focus has been notably on Trump’s tweets on the subject of geopolitical tensions. Investors do have some experience how Trump’s handles such a situation. Think of North Korea that looked quite threatening but has resulted in a future Summit with Kim Jong-Un. The same may happen with Russia where Trump plans to meet with Putin but uses his “punch in the face” strategy to get meaningful dialogue. The "unknown-unknown" of missile attacks causes the oil price to go up but other traditional safe havens like the Japanese Yen, Swiss Franc or Gold have seen limited impact. Markets could be more driven by other factors.

For example, how China will pursue trade policy through its exchange rate, the Chinese Yuan. A sudden devaluation of the Yuan like in 2015 seems less likely because of China wants to stay in compliance with the G-20 group of industrialized countries.

In 2015-2016 markets were worried the signal of the Yuan devaluation meant significant economic slowdown. That didn’t happen but instead through G-20 communication and the Federal Reserve holding off on tightening in 2016, financial markets revived. Now a Yuan depreciation is “studied” as per reported news last week, markets will have to focus again on the ramifications of Chinese exchange rate policy.

There are three factors that play an important role going forward:

China’s capital controls remain strongly in effect but China cannot depreciate the currency without lifting some of those controls. By lowering trade barriers while depreciating the Yuan versus trading partners may not be beneficial for trade. Imposing reciprocal tariffs and adjusting the exchange rate poses a conflict of interest. That is because of disadvantaged trade or seen as deliberate action that causes retaliation by trading partners.

The way the Yuan is trading versus the dollar or stated as the ‘official’ Renminbi currency basket is not accurately registering what kind of exchange rate policy China is conducting. Rather, by looking at the percentage weights of China's total trade, exports and imports relative to its major trading partners, a "trade weighted" Yuan can be calculated. That measure provides a more accurate picture of what is happening with China's exchange rate.

In the table below is shown the trade weighted Yuan by percentage of total trade, export and import. The periods chose are since the Trump election (11/8/16), Year to Date (1/1/18) and since Trump began tweeting about trade wars on March 2nd.

On an absolute basis, the Yuan is about 3 to 7 percent stronger versus the dollar since Trump election all the way through recent trade war tensions. Versus European and Asian currencies, the Yuan is in some cases stronger by 10 percent.

But on a trade weighted basis, the appreciation of the Yuan is just 1 to 4 percent since the Trump election until recently. And by specific trading regions like Europe ( represents 20 percent of China’s trade), the Yuan has actually depreciated.

Markets will pay close attention how much the trade weighted Yuan depreciates versus trading countries. Because by imposing reciprocal trade tariffs or insufficiently lowering trade barriers while depreciating a currency could provoke retaliatory trade action by other countries. For 2018, this remains a key risk that could weigh quite negatively on financial markets. 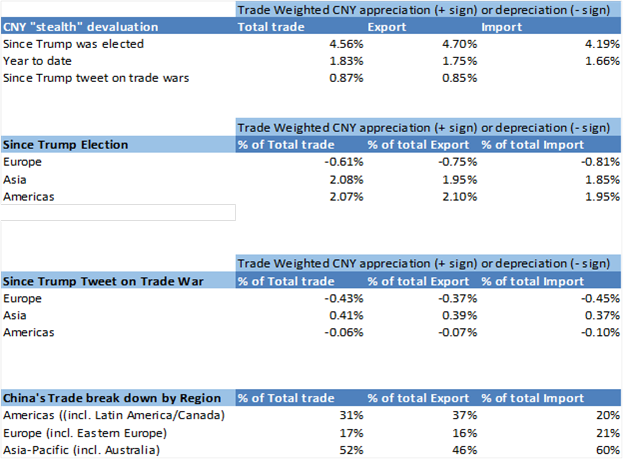 An important test for all markets

A Different Message From The Fed