Financial markets once again embraced President Trump’s tax reform with euphoria. Although details lack and uncertainties remain, the impact of reform was priced in as a positive outlook for the U.S. economy. This was seen from a strong rally in small cap stocks and companies with a current high effective marginal corporate tax rate. The dollar received a boost and Treasury yields rose on the prospect of higher GDP in the coming quarters. Now the question rises whether tax reform is an “inflection point” for the economy?

That greatly depends on the effect of fiscal policy. The “fiscal multiplier”, which is the ratio of change in a nation's income level affected by a change in government spending, stands at the highest level since the 2008 financial crisis (see Figure 1). Estimates by IMF research show fiscal spending multipliers have risen near 1 when government spending fell sharply after the financial crisis.

From a recent study on fiscal multipliers, government investment and corporate taxes stand out in terms of potential effect on the economy by as much as 0.7 times positive impact on GDP. As the U.S. economy has regained footing over the summer and does not look to weaken near term, fiscal expansion and tax reform comes at an opportune time when implemented in 2018.

In 1981, Office Management and Budget Director David Stockman wrote a memo to President Reagan titled “avoiding a GOP Economic Dunkirk.” Stockman argued a needed rebound of real GDP could only be accomplished by tax cuts and a substantial reduction of regulatory burden on businesses. President Trump’s tax reform is almost a mirror image of Stockman’s proposal but faces like in 1981, a challenge to balance fiscal policy by controlling long-term spending outlays. Specifically, such balancing act is complicated by inflation expectations that were in 1981 too high while today they are too low.

To remedy this, Stockman proposed to cut spending while funding the budget with long-term borrowing to influence inflation expectations. Evidence of this was seen in the 1980s when the maturity of outstanding U.S. Treasury debt lengthened by almost 2-years during the Reagan administration. Inflation expectations moderated from high single digits down to 2 percent by the end of the decade (see Fig. 2).

When Treasury Secretary Mnuchin floated the idea to issue 50-year or longer maturity bonds during the first outline of tax reform released in March, inflation expectations rose near 2 percent. One effect of tax reform is the Treasury may issue 50-year and 100-year Treasury bonds on a more regular basis. This could lengthen the maturity of Treasury debt to a new high. 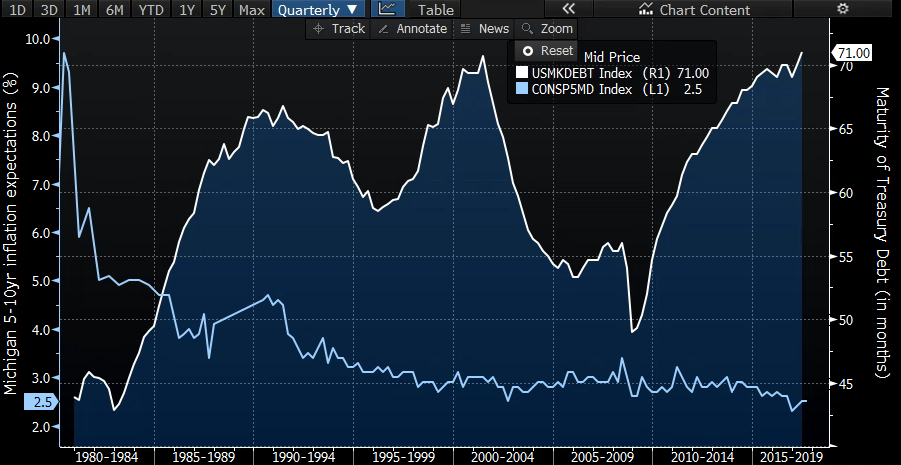 The Trump agenda could be viewed as a three legged stool. The S&P 500 is about tax reform, the 10-year Treasury yield about funding infrastructure (and tax reform), and the dollar is about global trade and geopolitics. So far, the market has priced a third of the agenda that may actually materialize. That led to weaker dollar and falling Treasury yields that has propelled the stock market.

With fiscal multipliers close to one, maturity extensions of government debt a possibility, and the global economy gaining more momentum, an inflection point is reached for the Trump fiscal agenda. If the Trump administration follows what David Stockman proposed in 1981 to President Reagan, tax reform looks to pass and that may bring the right kind of sustainable growth.

Bitcoin Futures : What this Market Means

Another Day, Another Estate Tax Repeal…