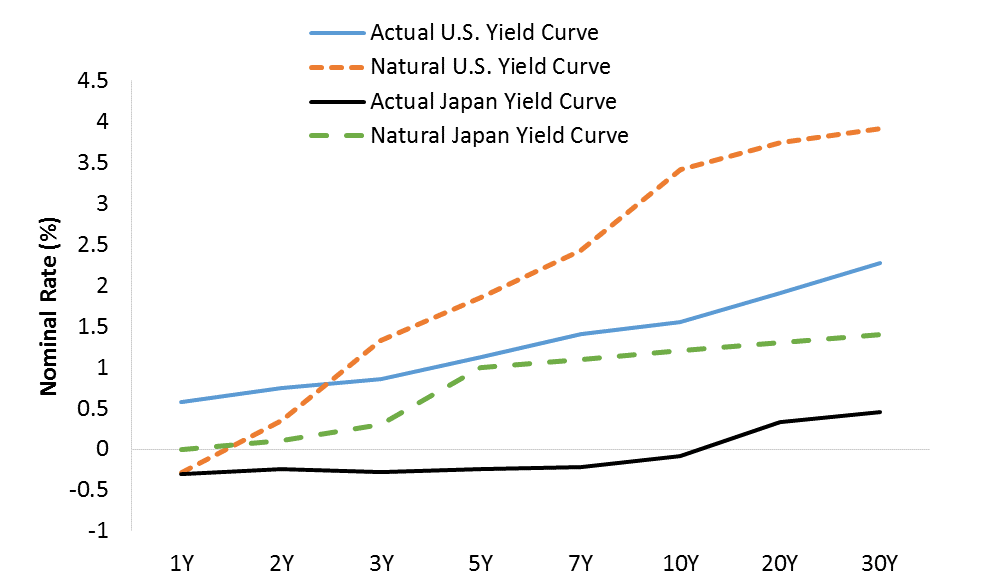 For monetary policy to be effective, creativity and innovation seems essential. The latest is “yield targeting” recently announced by the Bank of Japan (“BoJ”). Targeting yields on Treasury bonds require a central to trade securities the private sector wishes to sell or buy. In that case there should be a “natural or fair price” the private sector is willing to pay. To understand this natural price, research by the BoJ may provide insight. BoJ research staffers discuss a yield curve where the economy grows not too fast or too slow. This is the “natural yield curve” that extrapolates the natural rate of interest by individual maturities.

BoJ research looks at level, curvature and slope of the curve adjusted by model factors (Nelson-Siegel model). The idea of a natural yield curve is when the actual yield curve is close in value, the output gap is narrowed, inflation should be at target and the economy operates at full employment. The current natural yield curve for the Japan and the U.S. suggests a 10-year yield of 1.5% and 3.4% respectively. At those yields, the price of the 10-year JGB and U.S. Treasury is around $84. Would this $84 be the natural price for long maturity government bonds?

Whether $84 is the “natural bond price”, the government bond index universe is currently priced quite differently. For example, duration weighted price of the Barclays Global Government Bond Index for JGBs and Treasuries is $118 and $106 respectively. Historically, the bond index price and “natural price” have a reasonable relationship. This is shown in Figure 2. 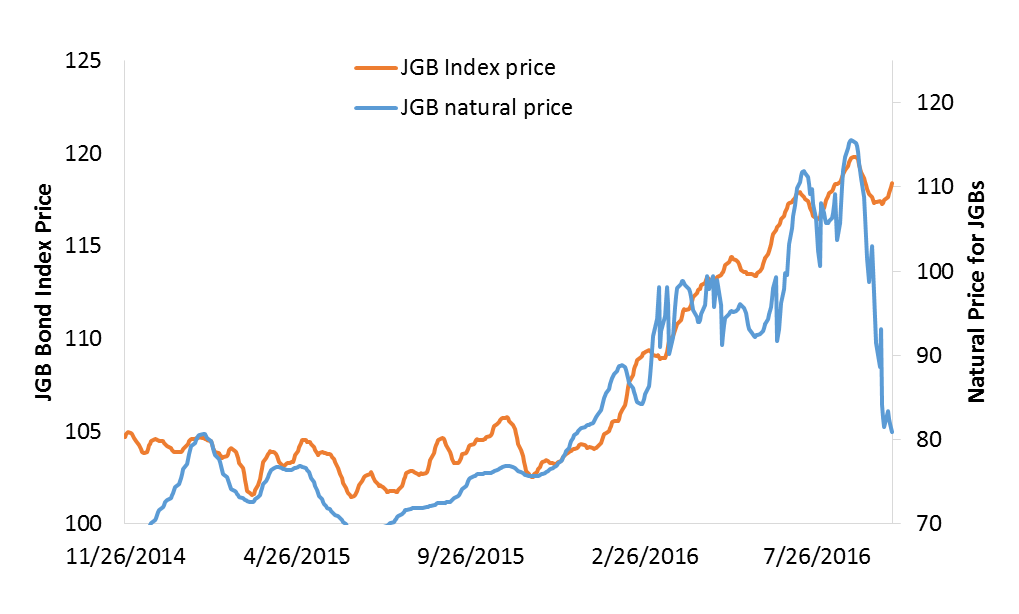 Recently for Japan, this relationship broke down. There are two explanations for this.
The natural price has fallen sharply because the long-end of the JGB yield curve shifted steeper as it became apparent the BoJ would “taper” its purchases of long maturity bonds. The other explanation is the shift in the Japanese yield curve brought it closer to where the presumptive natural yield curve could be. Although Japan remains near deflation, the output gap is small and unemployment is low. Long term interest rates in Japan may have recognized these conditions, and as such “normalized” accordingly. And indeed, 40-year JGB bond prices fell to a low $90s recently.

The consequences of the existence of a natural bond price may imply a significantly (bear) steeper yield curve. That being said, a credible yield target may serve as a soft cap for rates for some time. A cap on rates has a material dampening effect on long term interest rate volatility. That is because a yield target functions as an explicit long term forward guidance. Under that guidance, a yield target could be an anchor for growth and inflation expectations. If successful, the current economic regime of low inflation and low unemployment could shift. As such, a credible yield target could bolster central bank confidence to normalize short term interest rates more quickly. There are a few investment implications to conclude:

Long term interest rates have been an unwitting beneficiary of uncertainty, shortage of safe collateral, negative interest rates and excess savings. These forces are likely to stay in effect may not be able to withstand a sudden selling pressure on long term bonds. Markets and central banks have recognized the short-term natural rate is low but the long term natural rate remains unknown. In search of its exact value, long maturity bond prices are vulnerable.